“The New Definition Of Wealth, And It’s Not What You Think” 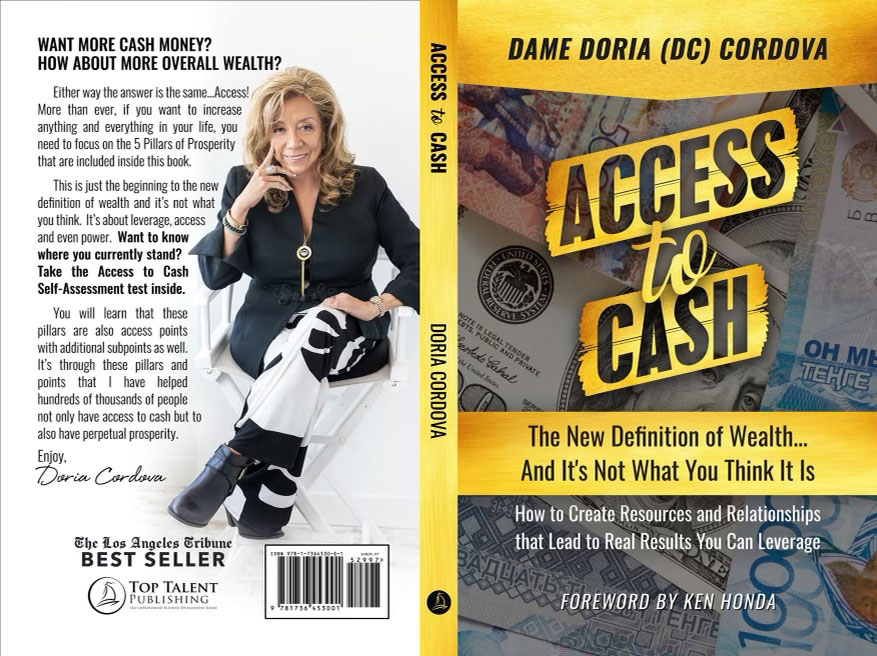 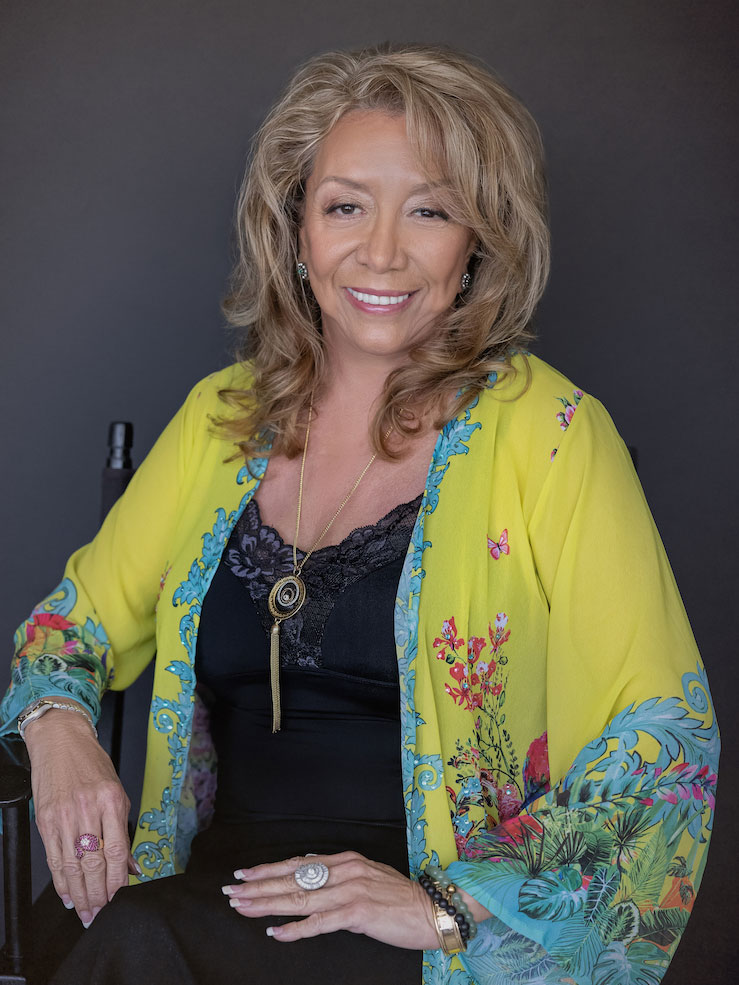 Thank YOU for visiting us!

In the book Access to Cash, Dame Doria (DC) Cordova teaches how to create resources and relationships that lead to real results everyone can leverage by introducing the “5 Pillars of Prosperity” in terms of accelerating your access to cash.

She has published the Money & You Book Series, including this new version of ACCESS TO CASH which educates the masses with tools, techniques, and principles used by millions to reach financial and personal success. 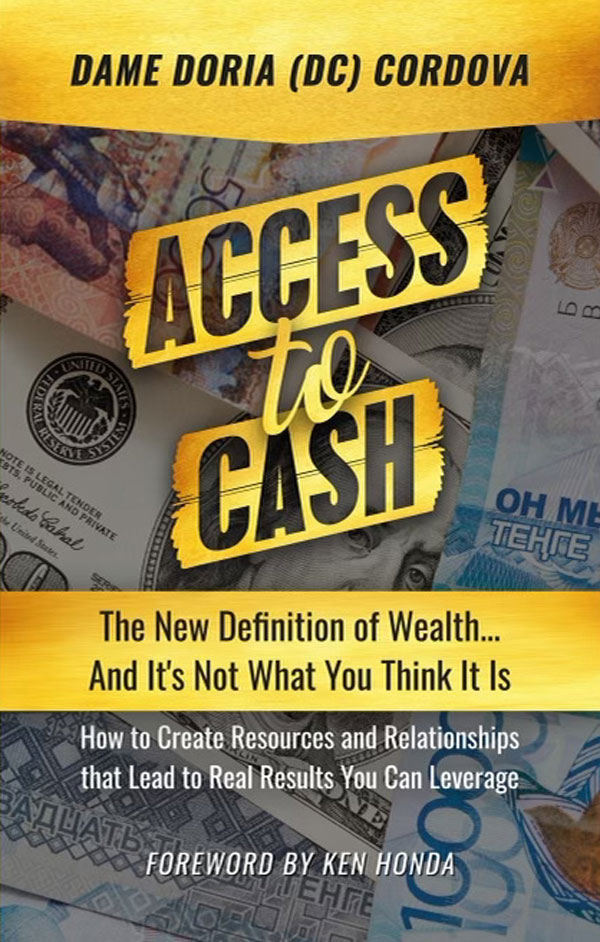 Here is what Entrepreneurs are saying about Access to Cash and Doria’s work:

“Thank you so much, Doria Cordova! What a gift you are! The principle of leverage that you teach in this book has helped me generate over US$100 million dollars liquid, exponentially grow my team, and find the peace I was searching for.”

“Thank you, Doria, for teaching me how to express that which I truly desired. I learned that there is power in verbalizing to someone a declaration of intent. It worked beyond my expectations… I now have very successful multi-million-dollar businesses, I have a beautiful life partner, a gorgeous little girl – with another child on the way! And I now lead the Money & You® and Excellerated Business School® for Entrepreneurs programs!”

During this Launch you can purchase the e-book in Amazon for only US$ 6.97!

At this price, buy a dozen of them – share it with your teams / family / friends / young people and mastermind with them the materials in the book – it will change their perception of what money and wealth truly is… 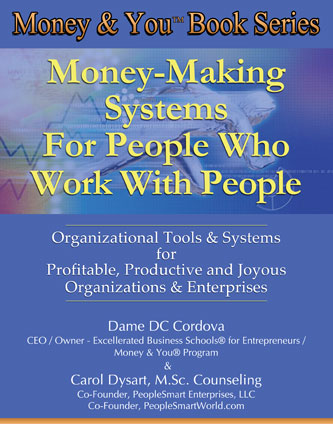 This tool has been used, tested and tweaked by countless entrepreneurs, professionals and educators. It will organize you to focus on more Income-Generating Activities and Create More Leverage!

She owns Excellerated Business School for Entrepreneurs®, Money & You®,and other Excellerated programs, a global platform with nearly 200,000 graduates since 1979 from over 85 countries – especially from the Asia Pacific region the Americas. The programs are taught live and online in English, Chinese, and Japanese – soon expanding to Tamil, Hindi, Spanish, Bahasa, and other languages.

Many of Today’s Transformational Leaders have attended the Excelleratedprograms and have gone on to duplicate and expand the Excellerated experiential educational methods. The list of Notable Graduates of her Money & You program reads like a “Who is Who” of today’s wealth experts, including Tony Robbins (Motivation Rock Star), Jack Canfield and Mark Victor Hansen (Chicken Soup for the Soul Series), Ben Cohen (Ben & Jerry’s), Paul Mitchell (Hair Products), Sharon Lechter (co-author Rich Dad/Poor Dad), Forbes Riley (Celebrity TV Host), and many more.

See the historical figures that have taught in her Business Schools:
http://www.globalexcelleratedbusinessschool.com/notableinstructorssince1978/

Some of the notable instructors that have taught at the Excellerated Business Schools, including the likes of R. Buckminster Fuller, who inspired her and many to live their lives and create products and services asking this question: “How do we make the world work for 100% of humanity, in the shortest possible time, through spontaneous cooperation, without ecological offense or the disadvantage of anyone?”

Through these graduates, including her business partnership of nine years from 1985 – 1994 with Robert T. Kiyosaki of Rich Dad/Poor Dad fame, Dame Cordova’s work has touched the lives of millions of lives worldwide. The essence of her work is to create teaching environments where established (and up-and-coming) entrepreneurs, professionals, and educators focus on the bottom line/profits and create products, services, and programs that add value to humanity.

Cordova is the only Latin woman that was part of the group of pioneers, led by Marshall Thurber and Bobbi DePorter, that began the development of the entrepreneurial, experiential, transformational training industry in the late ’70s. She inherited the work on July 8, 1985, which has now expanded to what it’s today through countless partners, associates, teams, and the support of many graduates and friends.

Along with Robert Kiyosaki and his then-wife, Kim Kiyosaki, of the Rich Dad/Poor Dad series, in 1985, they opened that industry in Australia, New Zealand, and later Singapore. Subsequently, new partners have opened Malaysia, Taiwan, Hong Kong, China, Indonesia, India, Thailand, Philippines, Cambodia, and other countries. Their larger influence has been in the Chinese language – in the Chinese world through the Asia Pacific region. Having presented programs in China for 19 years. Dr. Willson Lin and his Doers Group organizations have put the Excellerated programs “on the map.”

Cordova is the only female leader in the industry that, for over four decades, has grown a global organization with a licensing model that has allowed her the independence to expand her business endeavors into Renewables and to continue her humanitarian efforts. She has reached this level of success by utilizing the many tools, principles, and systems taught in the Excellerated programs and her publications.

Her stated purpose is to “uplift humanity’s consciousness through socially responsible businesses.” Leading by example, Doria is a philanthropist, humanitarian, and an Ambassador of New Education with a tireless pursuit to transform educational systems worldwide and eradicate poverty and hunger.

She supports numerous non-profits, foundations, and humanitarianorganizations as a mentor and champion. She is now leading this work through the Doria Cordova Foundation.

Doria is a Mentor of Nurturing through her work with high-level entrepreneurs and business leaders. She is a “connector” with a special gift for bringing together diverse, successful social entrepreneurs worldwide.

She is one of the contributors in the Think & Grow Rich for Women book. She is the author of the comprehensive systems manual, Money-Making Systems. She has been a contributor and written forewords in countless books.

Doria has participated in dozens of motivational films, television, and numerous online shows. She has been interviewed worldwide in every type of media; and has hosted the Money & You radio show. In addition, Doria has spoken on many stages, podcasts, summits and is a sought-after speaker, mentor, and advisor.

Doria started supporting her network with different programs and experts to help them get through the Global Paradigm Shift that was created by the Covid pandemic… It evolved into the Fridays With Doria & Friends  global platform, which now has a plethora of excellent teachings from experts who share their mastery, strategies, knowledge, at no cost, to all who desire to further their entrepreneurial journey.

Doria is currently developing her dream, the Excellerated Online University – a platform that will include the many mentors and masters she encounters daily in her entrepreneurial and humanitarian endeavors.

To learn more about the incredible journey that Doria has taken to get to where she is today, go to https://dccordova.com 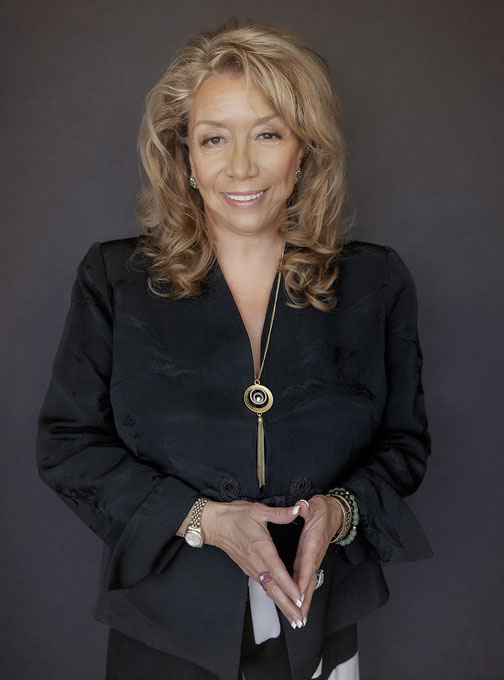 Here is what Entrepreneurs are saying about Access to Cash and Doria’s work:

“For so many years I had this feeling about being successful, but yet not making ends meet. This redundant flow of ups and downs made me more worried than happy about my relationship with money. Now, with help of this amazing publication I just realized that I was have a negative experience made by my powerful mind. This book has helped me to develop my inner power of nursing myself with this bright new energy. For me, this new way of reaching people, projects and money has been a blessing, and definitely a game changer for me and my legacy. I will thank you always, Dame Doria Cordova, for showing me the authentic way to access resources, Aloha Nui Loa.”

“The moment I started reading Dame Cordova's book Access To Cash, I knew it was exactly what I was looking for. The book covers a lot of information that is delivered in concise chunks thus easy to absorb. The author obviously put a lot of thought and efforts into writing it. I helped people accessing funds in the past; I wish I had had access to this book then - it would have saved me a lot of time and resources. I look forward applying this new-found knowledge in my next venture.”

"Access to Cash teaches principles about money and wealth and put it all into perspective, offering examples of things I could relate to. Reading it opened me up to this simple Truth which still makes me smile - both within and without - which is: all of us already have a level of wealth that is much, much more than we think and once we can see what that is, we can keep expanding it! Without the keys in this book, we are prisoners. My lock suddenly unlocked and closed doors flew open! I found myself with an abundance and continued access to cash that I’d never had before!"

At this price, buy a dozen of them – share it with your teams / family / friends / young people and mastermind with them the materials in the book – it will change their perception of what money and wealth truly is…

STEP 1: REGISTER FOR YOUR FREE GIFT

*Include your phone number and WIN an opportunity for a one-hour phone conversation about LEVERAGE with Dame Doria Cordova!